Many years ago (I’d say “about 25 years ago”, but that would make me feel way too old), Steve and I were roommates.  On occasion, I would be away from the apartment for a few days.

Upon my return, from behind his drawing board set up in our living room, Steve would gesture vaguely in the direction of where he had piled my mail.  Invariably, there would be little doodles on the envelopes where Steve had sketched idly while watching television.

They weren’t cute little messages or anything.  Steve was just a habitual doodler.  On whatever was nearby.  Constantly.

Even now, two and a half decades later, as I rummage through his hard drives for images to include in the book of his work (see the Kickstarter page to contribute), I am finding scans of images complete with the return address on the envelope in which they were sketched or with the text over which Steve had drawn.

What he did with them or how he did it, I can’t say.  What I do know, however, is that for every scanned sketch I can find, there are probably dozens that Steve never scanned for reasons that were only his to know.

I took pictures of a couple of examples of unscanned doodles as examples. 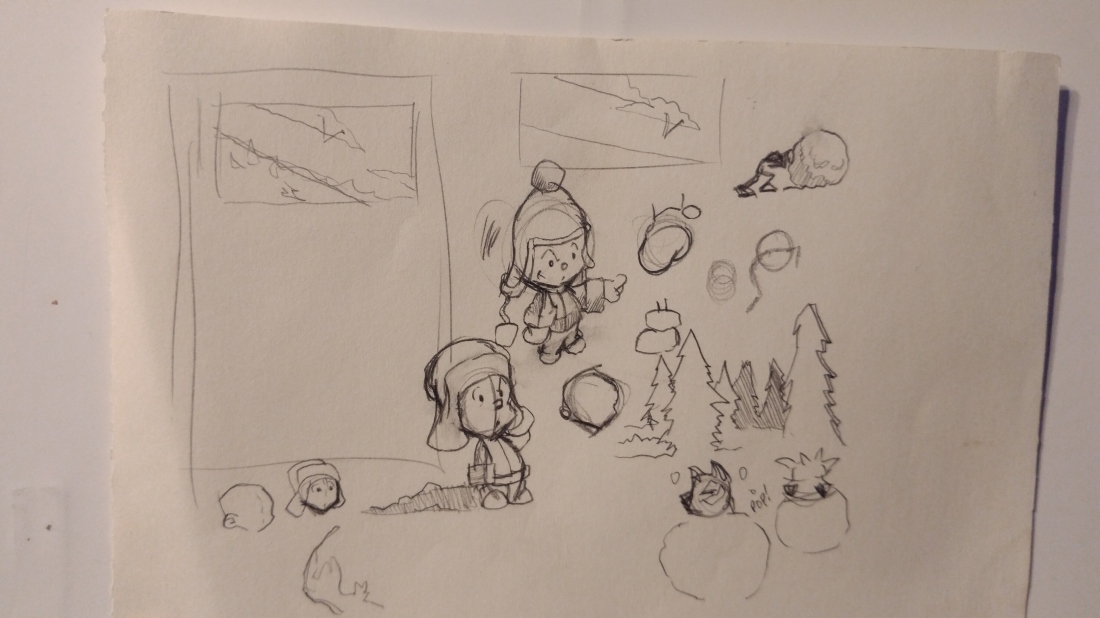 I think with this doodle, Steve was trying to layout a page for one of his stories.  Maybe.  In any case, what I want to make clear is that the little guy with the hat is, on the page, is almost exactly an inch and a half tall.  That dog’s head popping out of the snowball?  Half an inch.

On the other hand, he also left us pages like this:

These are sketches of the Dumb Guys.  My hand is in the bottom of the photo for reference, but in the interest of exactitude, Tom (the fully-drawn character scowling and pointing to the right) stands 11 inches tall on the page.  Surrounding him are other characters, hands, feet, cars and whatnot.